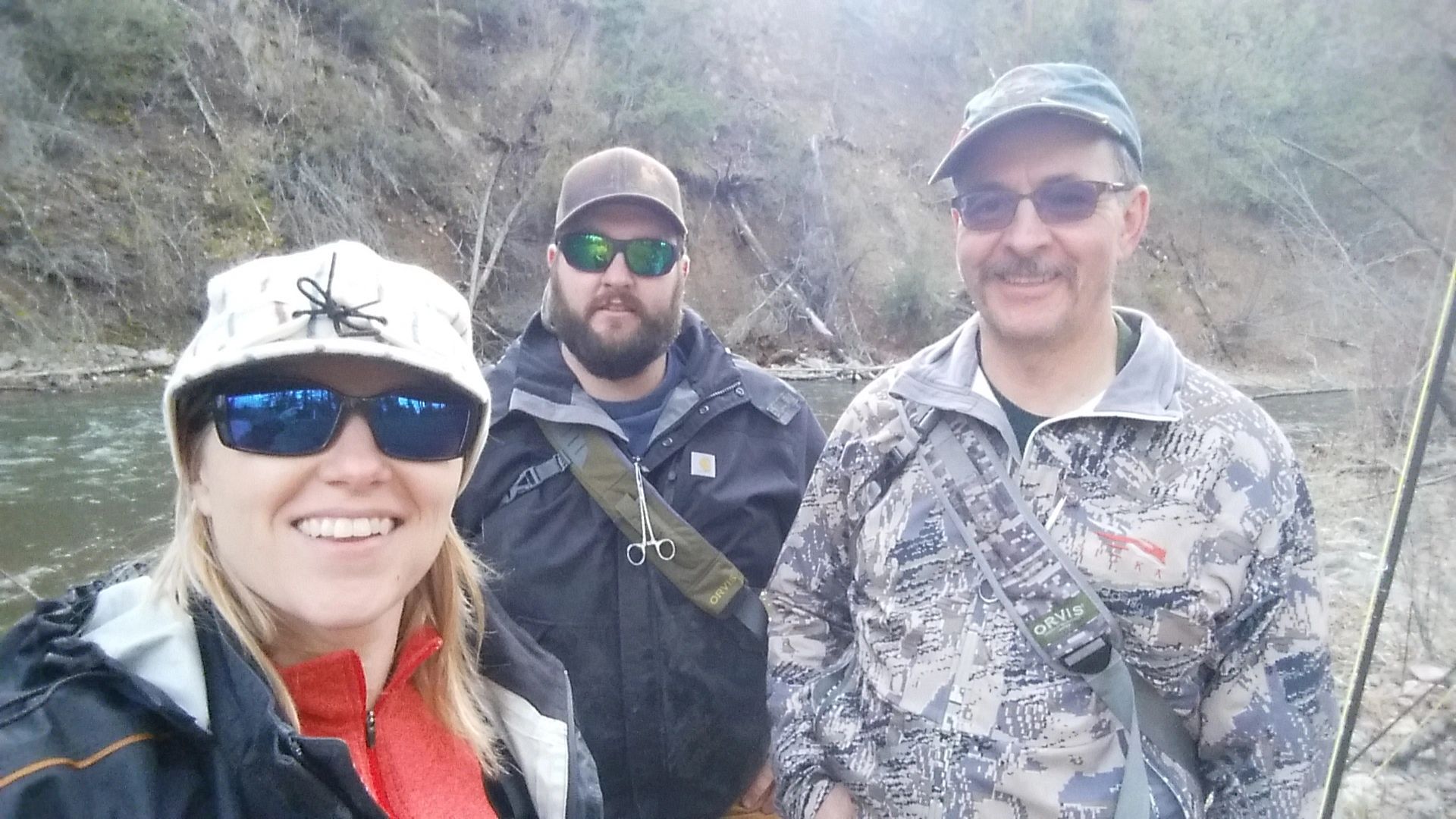 TRIPLE M OUTFITTERS  is a small family owned outfitting service located in west central Montana.  Our home base is Dixon, Montana.  Mark, our outfitter, has been in the business since 1983.  He also has been an educator in public schools for thirty years, thus he is skilled in teaching new comers the basics of the sport as well as catering to the needs of "old pros."  He and his wife Candy are native Montanans who have lived in the state their entire lives.  Matthew Faroni is an experienced fly fishing guide and excellent with guests.  He grew up fishing these waters with his dad and grew up outfitting.  Matthew loves to fish and guide and his passion for fly fishing makes it fun to be his guest.

We fish a variety of water conditions.  We offer everything from wade fishing streams in late fall for spawning browns to float fishing in early summer during the salmon fly hatch.  Because of the variety we offer we're confident we can provide an experience to your liking.

Our equipment is well-maintained and high quality.  We can supply rods, flies, and other tackle if requested.  Every trip comes with a nutritious, delicious shore lunch that can be tailored to fit any dietary needs.  We only offer trips on "quality" water that is clean and pure enough to support native trout populations.  Two of the streams we guide are designated as "Blue Ribbon"

We partner with Ninepipe's lodge in Charlo, MT.  They make the best cheeseburger's in the  entire Mission Valley.  They also have excellent lodging and make a great shore lunch.  Check out their website at https://www.ninepipeslodge.com/.

The BEAVERHEAD RIVER is located in southwestern Montana flowing through the town of Dillon.  It eventually joins the Big hole river to form the Jefferson.  It's a relatively small, slow flowing river whose water is comparatively cold.  Large browns and rainbows live among cover primarily consisting of over hanging vegetation, undercuts and long deep pools.

The BLACKFOOT RIVER is located in west central Montana.  It is a major tributary of the Clark Fork River.  The Blackfoot river is designated as a "Blue Ribbon" fishery as well.  This beautiful stream flows for more than 130 miles through the canyons with  rocks and in-stream boulders as well as flat coniferous forest land with smooth deep runs.  It's a very picturesque stream.  Brown trout, bull trout, rainbows and west slope cutthroat trout inhabit this great water.

We fish the CLARK FORK RIVER between St. Regis and Paradise Montana along the scenic byway #135.  This is a great stream for those who desire float fishing large streams with relatively slow deep drifts.  Visitors to this stream may see bear and big horn sheep.  Brown trout, rainbow trout and cutthroat trout inhabit this water.  We do hook up with an occasional bull trout, at least my wife does.

Trip Options We offer full and half-day wade fishing trips that include a guide, needed tackle and a filling shore lunch. We offer full and half-day float fishing trips that include a guide for two fishermen/women, flies and other necessary tackle along with lunch.We offer multi-day trips where you can fish two or three different rivers.We can accommodate almost any need, so let us know what you are looking for and we will get it done.

"Each  day our guide Mark would show us the best spots to fish and share his  years of experience as only an experienced guide can do.  In the six  years we have been fly fishing from Alaska to the Caribbean, he is easily the best guide we'd ever had." ----Dan Orr,  North Carolina

"My wife and I started fishing with mark in 1993.  We have fished the Big Hole, Blackfoot, Clark Fork rivers  and Monture Creek with him.  On my last fishing trip with mark on the  Big hole I caught every known species in the river.  Mark is a very  knowledgeable guide about all the waters we have fished.  For those  women interested in fishing, my wife says he serves a great lunch!!  My  wife and I consider mark a good friend." ---- Danny and Judy Howell, Okalahoma

"My  first trip with Mark was the summer of 1991.  We did a wilderness pack  float.  Since then I have done at least 5 additional trips on the Montana rivers  that happened to be fishing well and had good flows at the time we  decided to fish.  We always caught enough fish to keep our groups  satisfied, although our objective was quality rather than quantity.  We  enjoyed good food, good company, good dry fly fishing and saw a good  slice of he fishing Montana has to offer.  No doubt I will fish with Mark sometime soon." ---- Barry Getto, Massachusetts

Triple M Outfitters added a drift boat to our guiding options this year.  Next season we will have a drift boat option with casting platforms to accommodate clients in comfort and style.

What should I bring with me?

Anything you think you may need, your guide will contact you to ensure he has the proper fishing gear you need and to inquire about dietary restrictions.  Bring a positive attitude a camera and any medications you may need.  Rain gear is always a recommendation in Montana.  Your guide will have snacks, lunch and fishing gear.  If you  have your own gear feel free to bring it along.

What if I am rusty or new to fly fishing?

Our guides are experienced and excellent teachers.  Our guides are patient and have seen it all, they can help the person who has never fished before or give tips for someone who needs to brush up.  Their knowledge of the rivers we fish is extensive and they can offer tips and tricks to help anyone catch fish.

Why hire a professional guide?

Anyone can get a license and head out to fish on their own, however, getting a guide to take you enhances your days of fishing and gives you the best chance at a rewarding fishing experience.  They take care of everything you need and you will have a fun trip with excellent opportunities to catch fish.

If you've never been here or are just getting back into the sport a few days on the river with a guide provides invaluable knowledge and exposure to a new area or tips for brushing up on your skill.

Drop us a line!

We love our customers, so feel free to contact us any time.